LaBamba and the Hub Caps (Wheelcovers)

Over the last year or two I lost two hub caps. The correct term here is “wheelcovers”, they cover the whole wheel, not just the hub, which is the centermost piece, but most people refer to them as hub caps.

I’m guessing that part of the reason I lost two hub caps is that I had been riding around on worn out axles and every road bump, jolt and vibration reverberated through the chassis and running gear. After enough of these, the hub caps popped off.

We had to make a decision as to whether or not we wanted to replace the hub caps or maybe replace the all the wheels with some type of aluminum or alloy wheel that would not require a hub cap at all. 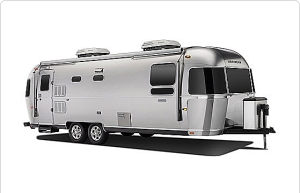 This is what a modern Airstream looks like. Notice the fancy wheels. No need for hub caps here!

Here is my trailer missing two hub caps. Also notice how low the trailer sits to the ground. This photo was taken prior to the axle install.

I considered changing over to the alloy wheels that would not need hub caps, like on the new models, but I really wanted to keep the exterior as original as possible. I searched high and low for hub caps but they were REALLY hard to come by. I bid a few times on ebay but was outbid at the last second on a few occasions. In most instances these wheelcovers ended up selling for over $55 apiece! That is almost the cost of those fancy new wheels! 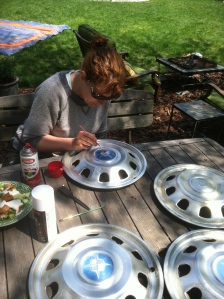 Michelle hard at work painting the centers of the 1970s Argosy hub caps to be used on our 1972 Airstream. The two in the foreground are the original ones from my trailer. They received a fresh coat of paint as well. 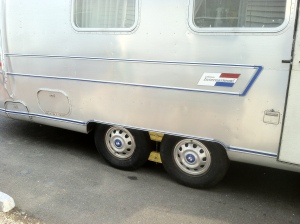 We are heading out on a trip to Yellowstone next week. We’ll be gone for a month. That should be a good test for these new hub caps.

One thought on “LaBamba and the Hub Caps (Wheelcovers)”